Blockchain is a chain of data blocks, containing time-stamped digital records. Initially described by a group of researchers in 1991, this technique was intended to timestamp digital records so that no one could backdate or tamper them. The Blockchain concept went unused until Satoshi Nakamoto revived it again in 2009 to create a digital cryptocurrency, Bitcoin.

A Blockchain is a set of technologies and processes (protocols) that allow a master database of all transactions (ledger) to be stored, processed, and updated by all members (nodes) where communication can be independently coordinated between nodes (peer to peer – P2P) and all transaction data is verified by multiple trusted members or processors using an agreed (consensus) algorithm which can be added and linked to other blocks in database (hash cryptography) . 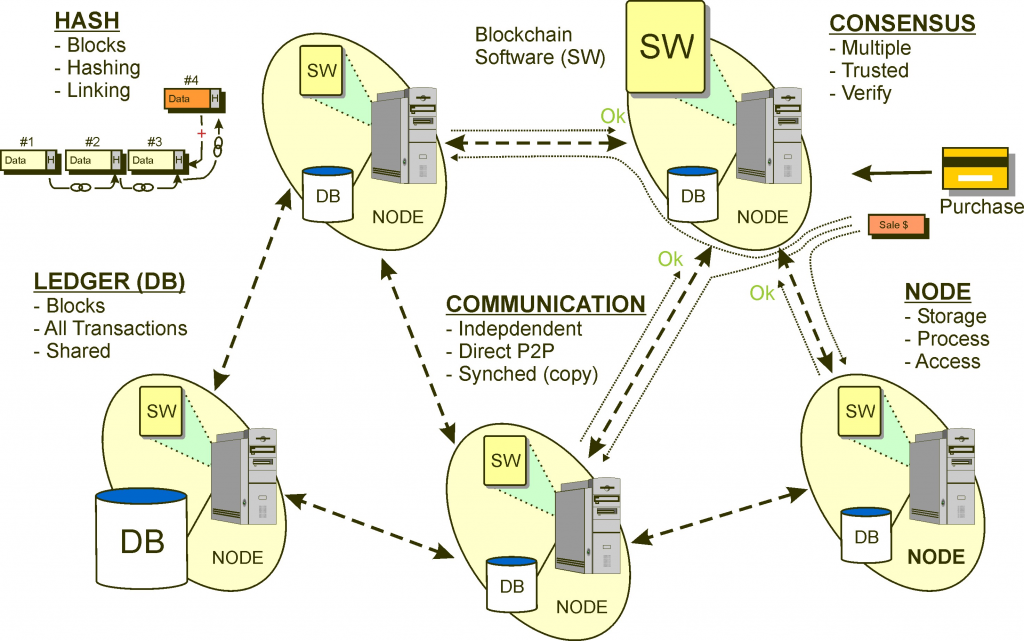 Figure 1 shows that a Blockchain Contains Ledgers (Databases), Nodes (Processing), Direct P2P Communication (Internet), Consensus Process (Majority Approval), and Hash Cryptography (Irreversible Security). In this example, a data transaction is submitted to multiple nodes for validation. When a majority approval consensus is achieved, it is added to the ledger database in a new block which is linked by a hashcode to the previous block. This new block is copied (synchronized) to all the databases at the other nodes.

Blockchain nodes are computers that maintain an updated copy of the ledger (transaction database). Some nodes have ledger mining capabilities to find, validate, and create new blocks that can be added to the Blockchain database (ledger).

Blockchain communication is independent direct peer to peer (P2P) which allows each node to discover and synchronize its ledger information with other nodes. All nodes do not need to be connected all the time. When nodes are connected or reconnect, they must gather (synchronize) with other nodes to get the latest blocks to be able to process new transactions.

The data recorded in a block depends on the blockchain type. It can be coin value (such as Bitcoin wallet value) or it can be measurement or transaction data (such as data from a Smart contract).

There are three types of blockchains; public, private, and permissioned.

A permissioned Blockchain (also called a consortium Blockchain) can be a hybrid model between highly-trusted entity model of private blockchains and the low trust offered by public blockchain. Rather than enabling any user to participate in the validation of the transaction process but in a consortium blockchain, a few selected participants are predetermined.